3d Printing Is Not For You

I would only recommend 3d printing to someone who wanted a hobby, and wanted that hobby to be 3d printing, not "having parts made on a 3d printer". The printing itself is the activity. If you have any other primary motivation your parts will fail more often than they'll succeed. 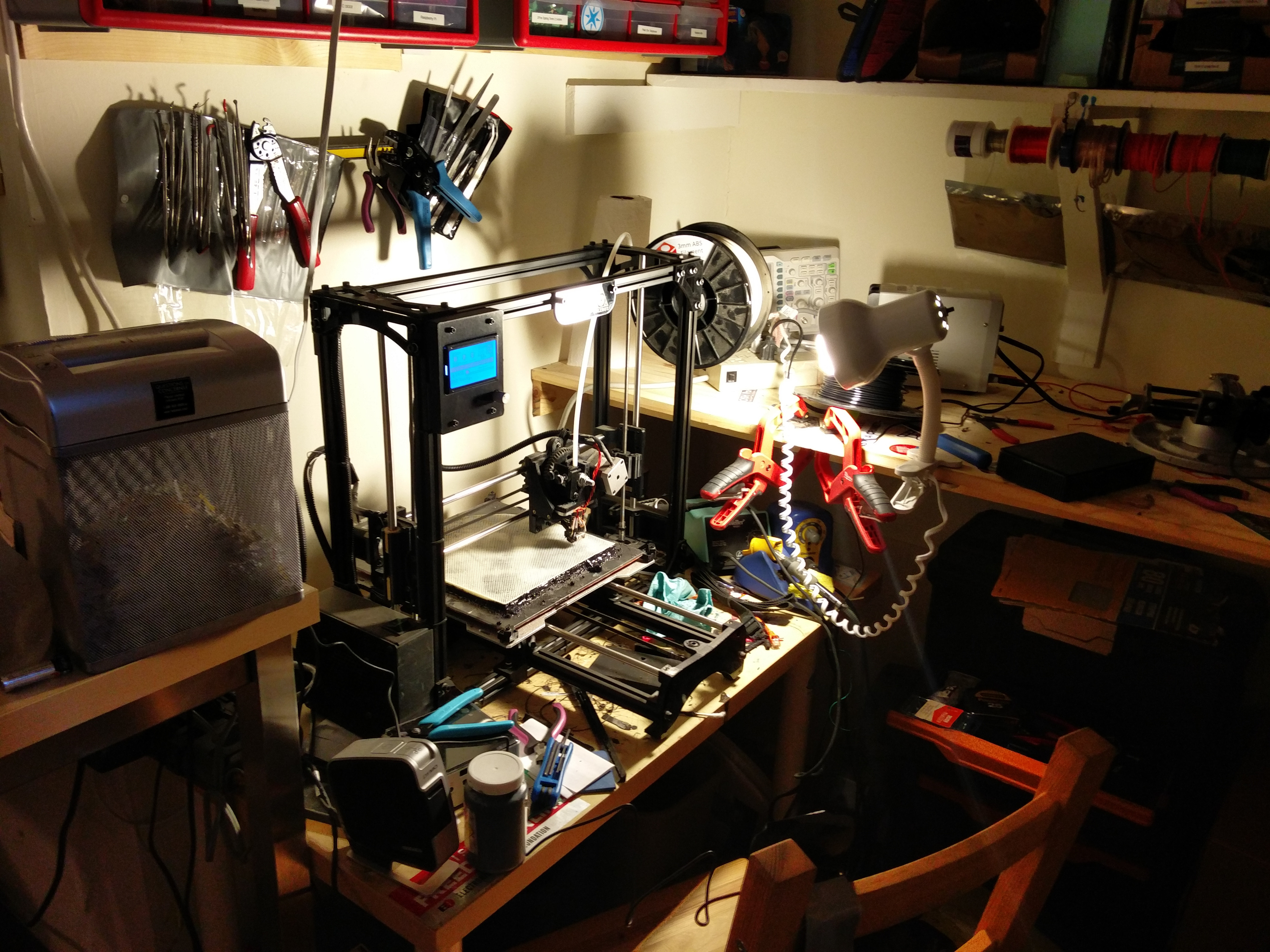 3d printing with open source tools is this weird siren's song for me. I'm an open source enthusiast and apologist. I'm an early adopter. I'm a born tinkerer. I'm a wishful inventor. I'm a programmer and electronics nerd. 3d printing theoretically ticks all the right boxes.

I've been joking on twitter lately about taking a laise-faire approach to my prints. Well, that just doesn't work. I can either joke about it, and still take the care, time, and attention required to get good parts, or I can behave that way, and make lots of substandard or broken pieces.

When I got my TAZ 2 in 2013 it was really the only power tool I had, or could have besides a household drill. Apartment buildings are not really conducive to the workshop lifestyle. I spent about two thousand dollars on it. I decided on a more known brand, with good reviews about service and support. It had an enormous print area (which I'll later tell you why that is silly) and a brand new version had just come out. There are many other reasons I'd recommend them, but if I had it all to do over again, I'd probably buy the cheapest printer I could stand. Something like what printrbot is making.

After your upfront cost, there's filament cost, which is honestly pretty negligible.

There is free software that will do everything you could possibly imagine, in a way that you can't possibly get your head around. I studied Electrical Engineering, I took several 2d and 3d CAD classes, and I work building software. I've built complex precise printed machines out of parts designed in OpenSCAD, which is a 3d modeling tool where the primary interface is a text editor. It looks suspiciously like programming. It is infuriating to use. I know how good modern commercial parametric CAD programs are, but I can't really justify the ($2k-$3k/yr) cost to use them. Operations like bevels and chamfers that are crucial to good prints and parts are nowhere near as simple in OpenSCAD as they are in Inventor or Solidworks. In OpenSCAD I'm constantly doing mental gymnastics and lots of pencil and paper geometry to translate axises of the various solids, additions and subtractions involved. Rather than put holes in things, you put a cube, then you put a cylinder then you subtract the cylinder from the cube. In Solidworks, it's a hole.

3d Printing is near instant, if you compare it to sending parts to a machinist you've never met in a country that you can't spell. If you compare it to sawing or working a block of wood for a simple part, it's near infinite. Sketches need translated into code, which needs translated into an object file, which needs translated into gcode, which needs sent to the printer one at a time. The bed needs checked and prepared for every print, and then the print gets started. The first print I typically rough-in (5% infill, thick layers) to verify that things are going well, and then I'll make another with better settings.

Every print time is different, but to estimate what I've seen on my printer:

You've probably spent considerable time in a classroom or office with a 2d inkjet printer. Nobody likes these machines, but if you were born last century, you've probably got some experience with them. For every problem an inkjet printer has, a 3d printer has an order of magnitude more problems. Ink will come off your paper if you don't let it dry? Individual layers will separate if the ambient temperature gets too low during your print. You have hundreds of layers. This can happen at any time during your 4 to 6 to 24 hour print. Ink running low? You can run out of filament and there are no sensors to let you know. Paper jam? The print head could move by a centimeter every 15 layers and now you have stairs where you meant to have a floor. It requires a level of expertise in 3d printing, and in your printer to succeed. My checklist looks something like this: 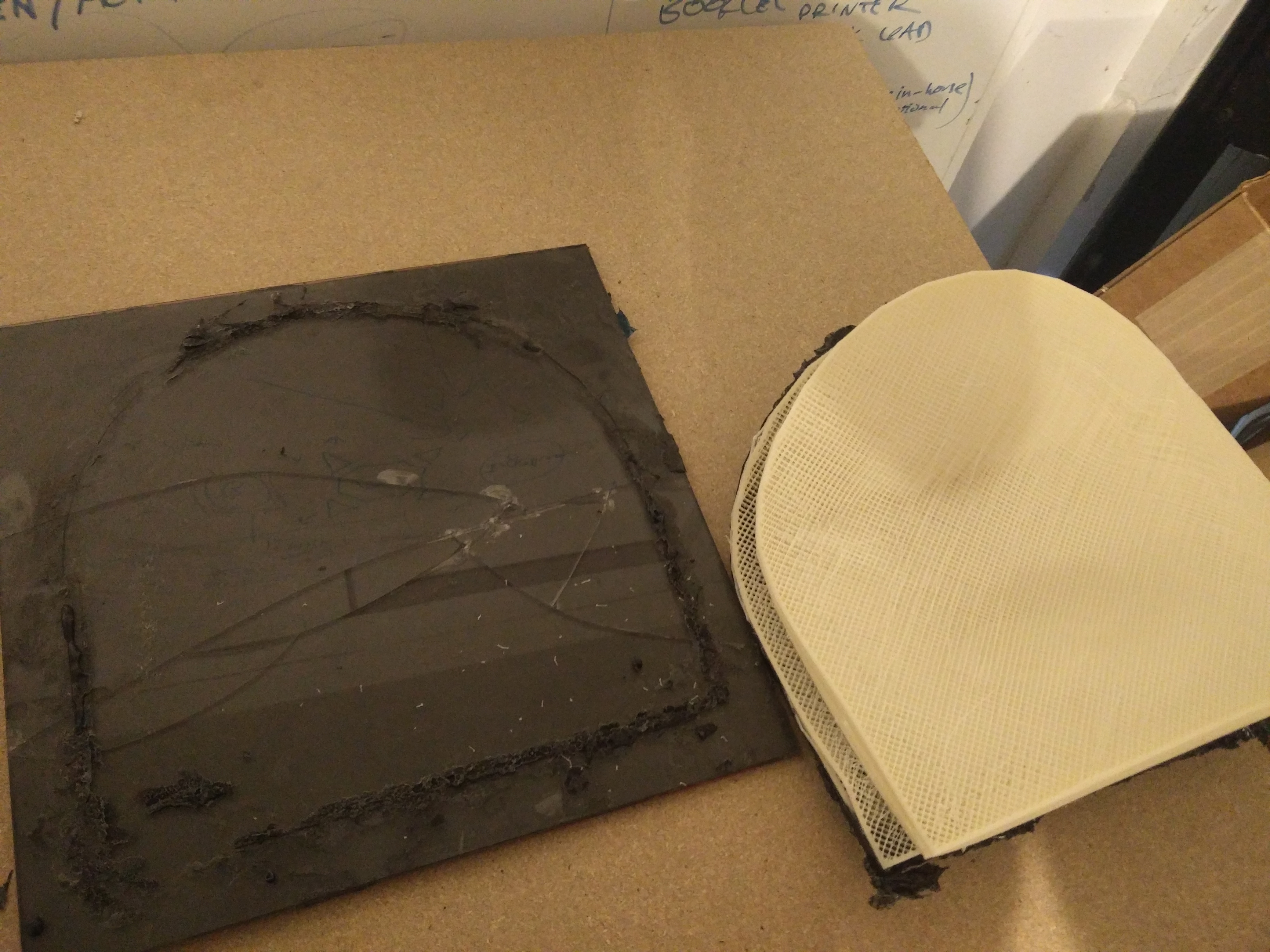 I've literally had each of these steps fail in one way or another. It's an enormous amount to process.

My most recent failure resulted in a shattered bed. I've got glass everywhere, and besides that the glass is glued to the heating element, It seems likely I'll have to replace both, probably for upwards of two hundred bucks.

Overall, 3d printing is fun, and it's incredible when it works, but I'm losing interest in the process and the product is substandard compared to most other methods of manufacture. I'm interested in 3d printing as part of another process, but as my primary process, I'm probably finished. 3d printing is for the sort of person who hears me say "It's not for you" and does it anyway. It takes that sort of determination and defiantness to succeed at it.

I put up a gallery on Dropbox of some prints over the last couple years. These vary from electronics enclosures, to robot parts, to parts made from 3d scans of sculptures and people. There are also some fairly frivolous things in there.

I won't ever give out your email address. I don't publish comments but if you'd like to write to me then you could use this form.

I'm Issac. I live in Oakland. I make things for fun and money. I use electronics and computers and software. I manage teams and projects top to bottom. I've worked as a consultant, software engineer, hardware designer, artist, technology director and team lead. I do occasional fabrication in wood and plastic and metal. I run a boutique interactive agency with my brother Kasey and a roving cast of experts at Kelly Creative Tech. I was the Director of Technology for Nonchalance during the The Latitude Society project. I was the Lead Web Developer and then Technical Marketing Engineer at Nebula, which made an OpenStack Appliance. I've been building things on the web and in person since leaving Ohio State University's Electrical and Computer engineering program in 2007. Lots of other really dorky things happened to me before that, like dropping out of high school to go to university, getting an Eagle Scout award, and getting 6th in a state-wide algebra competition. I have an affinity for hopscotch.